We tried protein pancakes and our verdict will surprise you

Recently, we’ve heard quite a bit about protein. It seems like everyday a new protein product is popping up. From protein ice cream to protein poptarts (I swear that’s actually a real thing), it seems like protein products are everywhere. But which are actually worth trying?

All my life I’ve been a pancake lover. There’s just something about those fluffy, delicious and satisfying flapjacks that makes me feel all warm inside. But unfortunately, due to my ever-expanding love handles, I was forced to cut them out of my diet completely. 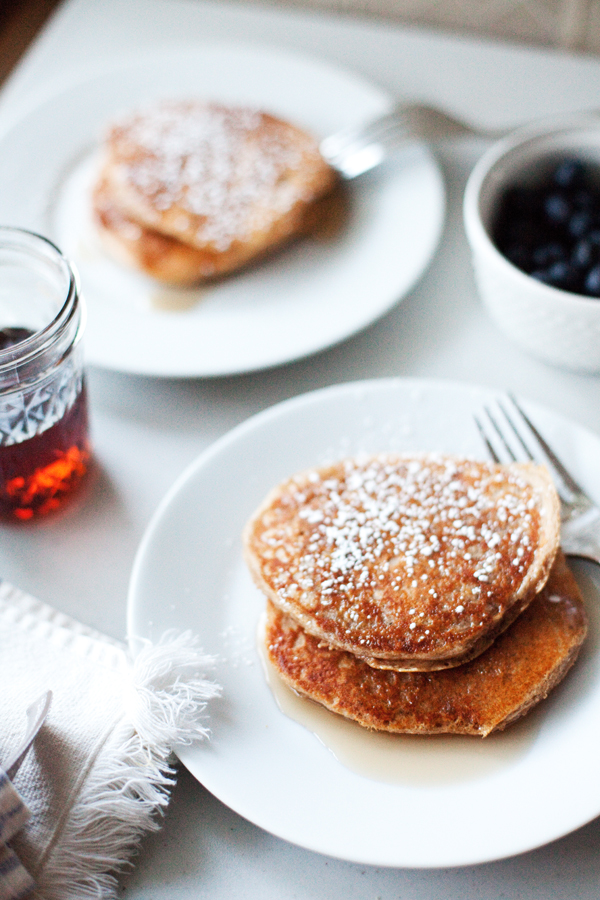 Until recently, the idea of a healthy pancake just sounded kind of wrong. But as I’ve shifted toward a more balanced and sustainable diet I decided to start bringing back more of my favorite foods.

After doing a quick Amazon search, I stumbled onto Phoros Nutrition’s protein pancake mix. Their mix had the highest protein and the least amount of carbs. When I scrolled to their reviews, their customers loved it! So I decided to take a leap of faith, and give them a try.

Since we live in the world of Amazon Prime the mix was in my hands the next day and I couldn’t have been more excited. The idea of reintroducing delicious pancakes back to my diet suddenly just felt right.

The pancakes were surprisingly really easy to make, all I had to do was add water or milk to the mix (I opted to use my favorite almond milk) and cook them in a frying pan. 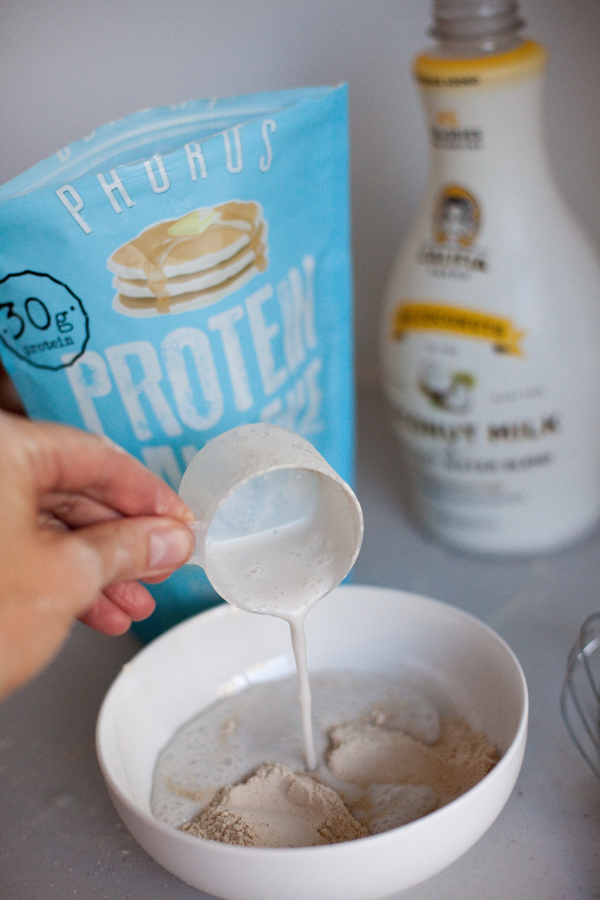 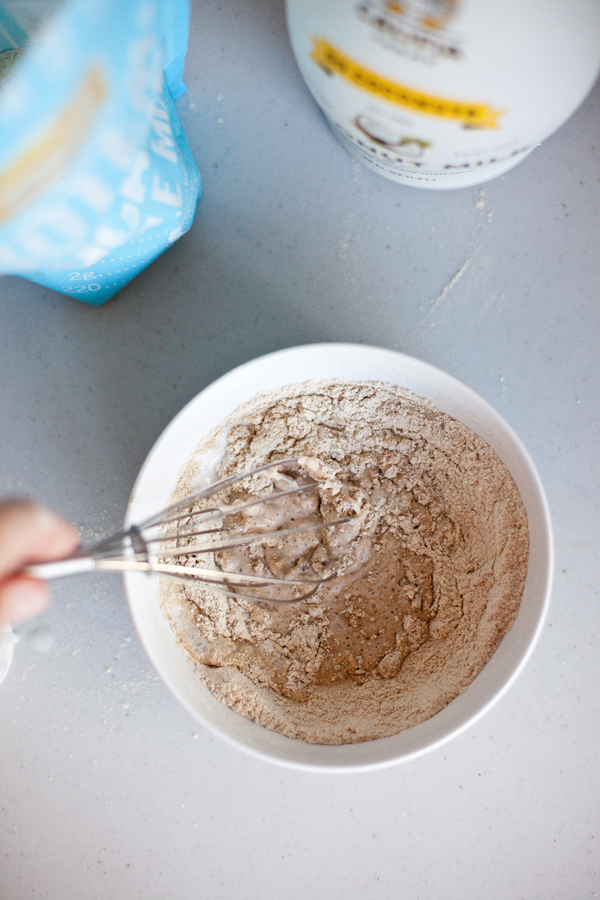 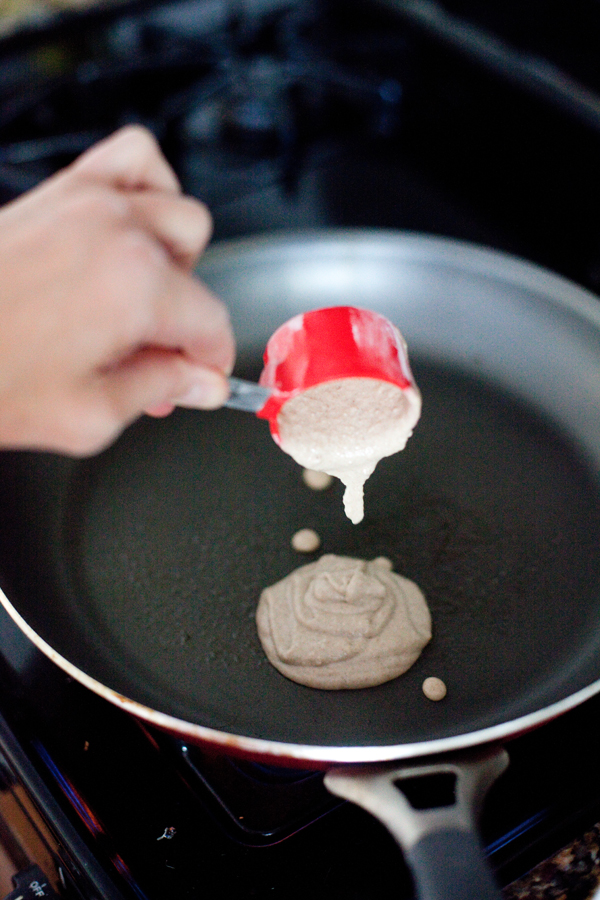 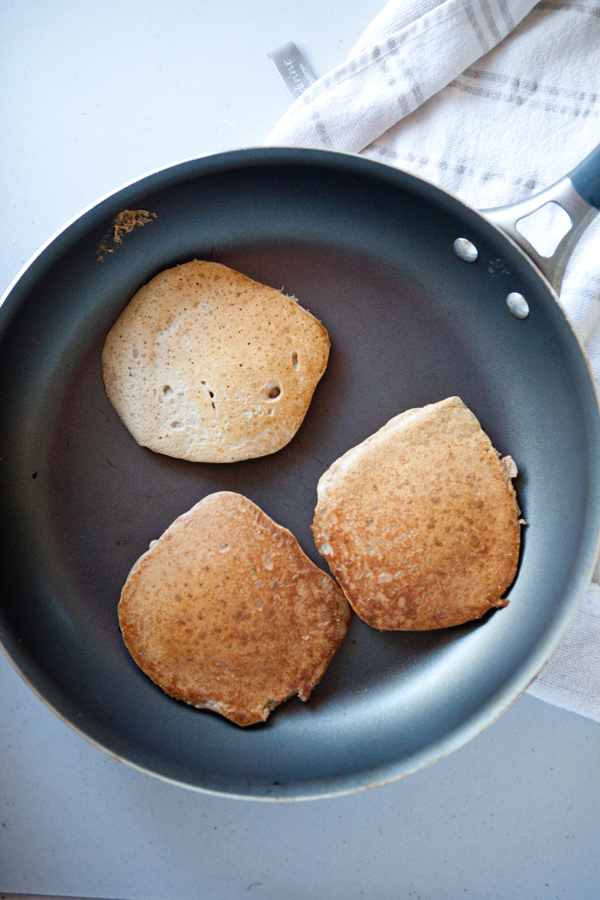 After a few minutes, I was looking at a beautiful stack of pancakes.

Needless to say, I finished them in a heartbeat. 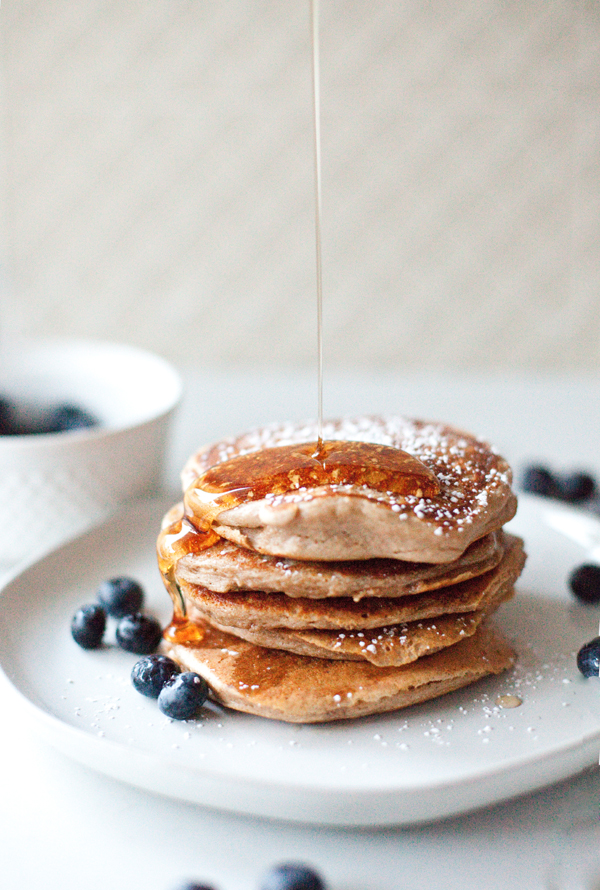 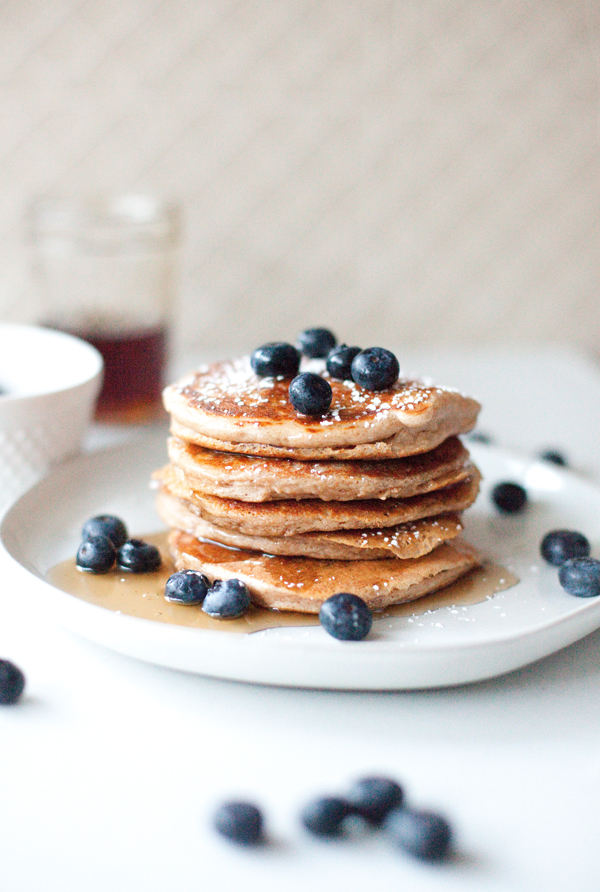 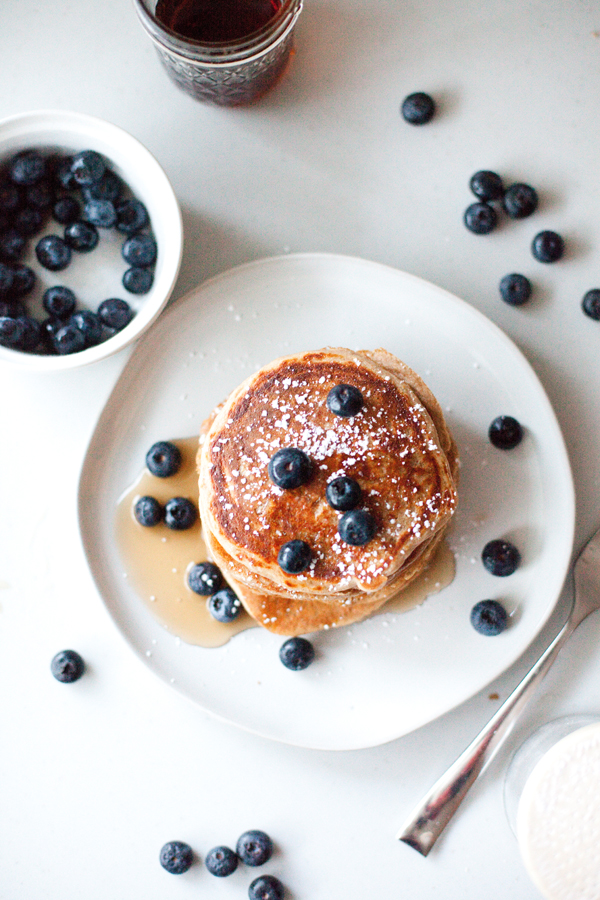 After licking my plate, I did a little bit more research about the product.

Protein, as you may know, is practically the most important component of every cell in the body. Your hair and nails are mostly made of protein. Your body uses protein to build and repair tissues, make enzymes and hormones, and is an important building block of bones, muscles, cartilage, skin, and blood.

Personally having struggled with getting enough protein in my diet, I was ecstatic to see that this mix packs a whopping 30 grams of protein per serving. No more nasty protein shakes for me!

At the same time the mix is also low in carbs. This is great because it lowers your insulin levels, which causes the body to burn fat; so yeah these pancakes might help you lose, not gain, weight.

This protein pancake mix had officially won my heart. Not to mention I discovered the mix just as easily makes protein waffles, and it also comes in a Cinnamon Roll flavor that sounds mouthwatering.

If you like the idea of eating pancakes on a regular basis as much as we do, definitely head down to phorosnutrition.com and get yourself a bag.

High-protein diets are the newest trend, and for good reason. Protein is said to help keep you fuller longer so that you don’t overeat or snack needlessly. It’s also said to help you keep your muscles from disappearing.

What else is highly loved? Coffee. That piping hot cup of caffeine that helps jumpstart your day. What’s not to love? Well, now there’s twice the reason to reach for a cup of coffee in the mornings. Huffington Post reports that LonoLife has come out with a Kona Blend, 100% Arabica Protein Coffee. That’s right, take your two favorite diet trends and mesh them together. Protein coffee is the end result.

The idea behind this new development is that the protein will fill you up more than a regular cup of coffee would, so you won’t go reaching for a muffin or donut at breakfast, or brunch time. Smart!

The type of protein used in this coffee is animal-based collagen, which is actually used as a protein for those who follow the paleo diet. I guess that means it’s not fit for vegetarians. Good news, though … There are protein coffees out there with whey protein as well!

If you’re like me, and you prefer vegetable protein sources, try the iEatProtein or Maine Roast Protein Coffee brands, both of which use whey rather than animal-based protein, so you can enjoy the coffee even as a vegetarian. Many of these coffee types are used as regular coffee replacements nowadays, so if you’re health conscious, or just want to cut back on your snacking, trying a new protein-packed coffee might be the answer. Some varieties, like the LonoLife mentioned above, even carry more protein than an egg. Bodybuilders rejoice! Your breakfast doesn’t have to consist only of eggs anymore. Shake it up and don’t feel guilty about your cup of joe.

We Try: Every Single Flavor Of Quest Bars

If you are a member of either an online or real-life fitness community, you have probably heard about Quest Bars before. The wildly popular brand (which grew a staggering 57,000% in its first three years, reports Food Business News) has generated a lot of buzz, and doesn’t look to be slowing down any time soon.

First of all, their nutritional profiles are pretty hard to beat: each bar boasts a high protein and fiber content, making them a smart post-workout snack or meal-replacement. Secondly (and arguably more importantly): they taste good, ya’ll.

As of May 12, Quest Nutrition offers 18 different flavors of Quest Bars, and so in the name of health and “science”, we hunkered down to present you with our official taste test and ranking of every single flavor.

We’ll get the ball rolling with what is sure to be an unpopular opinion, but we found this one to be vile. Granted, we’re probably the only two people in the world who have marked dislikes for cinnamon buns (and really all cinnamon-flavored treats), so this bar never really had a chance. But we’re the taste testers, so: we don’t care!

Definitely more citrusy than lemony. While we appreciate that it didn’t taste artificial, it was still just sort of dull and unmemorable.

Like most people, we can get down for a piece banana bread — but not when it comes in the form of a protein bar. We’ll award it some points for its soft texture, but something about the flavor profile here tasted bizarre and ultimately unappetizing.

Soft, and jam-packed with loads of freeze-dried berries. Each bite delivered a surprising amount of flavor, but the bar was hardly memorable.

In its natural form, this bar was unremarkable, but stick it in the microwave for 10 seconds, and it transforms into something truly reminiscent of the real thing (right down to the little chunks of apple in it).

As a huge fan of peanut butter, I was positive I would like this one. While it was hefty and had real, intact peanuts, it tasted nothing at all like peanut butter. Pass.

We were both expecting this thing to be as dry as Steven Wright’s sense of humor, but it was actually pleasantly chewy and steered clear of the over-the-top sweet profile sometimes associated with coconut-flavored treats (Almond Joys, we’re side-eyeing you).

This somehow managed to taste like if one of those sweet-smelling soap bars fell into a vat of spray tan. So, you know. If that’s your thing…

For lack of a better word, we found this to be the most gooey of all the flavors. It was extremely malleable, and tasted more sweet and gritty than cheesecake-y.

Again — where did the peanut butter go? What is going on? Why does this bar taste so much more synthetic and chewy than its other relatively non-chunky counterparts?

This bar is very soft, and to Quest’s credit, they do not skimp on the white chocolate chunks. That being said, the bar has that particular fake, fruity flavor to it. If you like white chocolate, this will probably be a hit; if you’re iffy about it like we are, this bar is going to come across as too cloying.

Since we were united in our opinion that the other peanut-centric flavors were disappointing, we weren’t expecting much from classic ol’ PB&J. Credit where credit is due, though: Quest nailed it with this one. I am pretty staunchly in the strawberry>grape jelly camp, so this bar brought me right back to my childhood. It was soft, crunchy and infused with just enough sweetness.

Yup. This works. Our only tip is to limit yourself to one, because Quest bars have a way of forming into cement blobs at the bottom of your stomach if you attempt to eat more. Our friend told us so.

This is the only non-chunky flavor that breaks the top 5, and that is because it is awesome. It has a dense texture, reminiscent of chocolate cake, and the cocoa flavor is decadent and satisfying.

This is essentially a giant Thin Mint, except with lots of protein, and generous amounts of minty bits that look so vibrant and green.

Chocolate on chocolate — this is the closest to a candy bar you’re likely to get, and we’re not complaining.

Texture, texture, texture. The graham-cracker flavored base is soft and rich, broken up with bits of what seem like real graham crackers, large chocolate chunks, and some white yummy mystery specks we assume are meant to represent marshmallows.

The undisputed winner by far. Too often have we tried cookie-dough-flavored treats only to find them lacking in flavor, texture, and general pleasure. Not so with this bar: It’s chunky, chewy, sweet, comforting and somehow good for you.

Just take a look inside: