I don’t know about you, but when I really need to get going in the morning — I’m talking a quick and dirty caffeine kick to the heart to jumpstart an otherwise lethargic-looking day — I don’t reach for Pop-Tarts first. I reach for a cup of coffee. 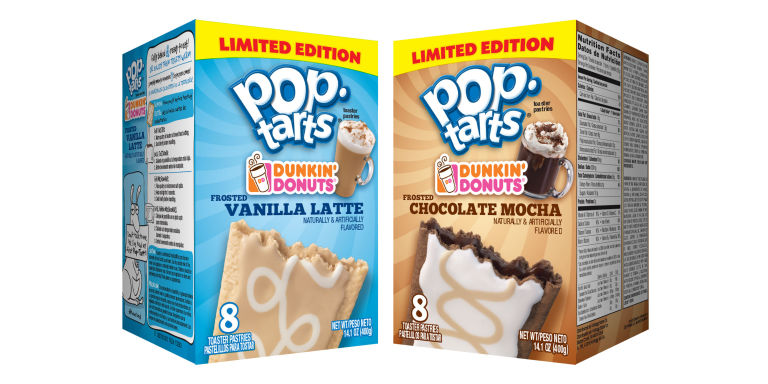 However, in a bid to take their breakfast game to the next, buzz-worthy level, Kellogg’s Pop-Tarts and Dunkin’ Donuts have collaborated and produced two limited edition latte-inspired Pop-Tarts flavors that are sure to get you off your feet and out into the world energized (probably more due to the sugar than the coffee, but whatever): Frosted Chocolate Mocha and Frosted Vanilla Latte Pop-Tarts.

According to Delish, the Frosted Vanilla Latte flavor is creamy and sweet on the inside, but delivers that yummy mocha punch with its coffee-flavored frosting on the outside. It also comes with a latte foam-art-inspired swirl on top for decoration. How stinking cute is that? If you’re looking for something a little more lush, then the Frosted Chocolate Mocha edition is the way to go, seeing as it’s chock full of decadent chocolate-espresso filling (we’re drooling over here) and then topped off just like at Dunkin’ Donuts — with a double swirl of “whipped-cream” (think Pop-Tart frosting, only cuter and creamier than usual). What do you think? Will you be snacking on any of these limited edition latte-inspired flavors when they hit shelves in December? They’ll run you about $2.59 for an 8-count box, according to Huffington Post. Sounds like a week’s worth of excuses to eat a pastry for breakfast, if you ask me!