A Colorado father is removing his 7-year-old son from his elementary school after he reportedly suffered a concussion at the hands of a group of bullies.

Kevin Guilford said he was crushed when his son, Desmond, came home from school one day with cuts and bruises all over his face.

“He said he plays by himself and he said kids would come by and push him on his back and stuff like that,” Kevin told Fox 31. “We do send the kids to school to be protected and get a great education and it didn’t turn out that way this time.”

On Dec. 3, seven of Desmond’s second grade classmates reportedly approached him on the playground and gave him an ultimatum.

“You have three seconds to run or we’re going to hurt you,” Kevin recounted.

“They like ran after me and said ‘Get him,’” Desmond added. “Then I ran and then I ran more faster, then one of them like tackled me.”

Desmond fell face first onto the ground. He was left bloodied with several scratches and bruises.

“It’s starting to scab now and last night when he was sleeping he asked me to hold him because he can’t roll over and that’s the worst one but the lip,” Kevin said. 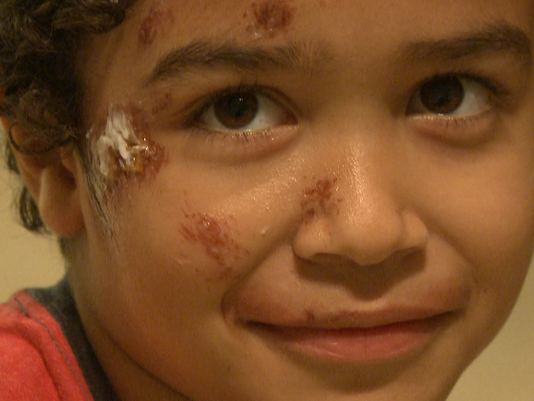 (Desmond after being attacked by classmates. Photo Credit: Nelson Garcia via 9 News)

To make matters worse, Desmond suffered a concussion. Kevin said the school initially told him that his son just fell and bumped his head.

Kevin went to the school to get some answers, but the principal allegedly blew him off.

“Student safety is a top priority in Aurora Public Schools. We take this report seriously and are investigating fully. We can assure you that we will take appropriate disciplinary action, but due to privacy laws we cannot discuss specifics. Our goal is to provide a safe learning environment for all of our students.”

“The thing is this has to stop for other kids,” he said. “I told my son, if we let this go and we just move you when what’s going to happen when the next family goes there and sees the happy pictures on the wall and they feel comfortable sending their kid up to the school.”

Kevin told the news station he’s withdrawing Desmond from the school and finding a new one. He added that he hopes no other child goes through what Desmond had to go through.

“I could not believe this could happen to my son,” Kevin told 9 News. “He didn’t deserve this. He’s a good kid.”