Are you so good at beer pong that you have run out of ways to make it trickier? Do you need a cool new party trick, or maybe a handicap to practice with on your own, so that you dominate when you’re with friends?

If this sounds up your alley, you might be looking for a way to shake up the classic game. What better way to do that than with a little gadget that moves your drinks around while you are trying to score?

Chip in $40 to the Pongbot Kickstarter, and one of these little beer pong robots could be yours: 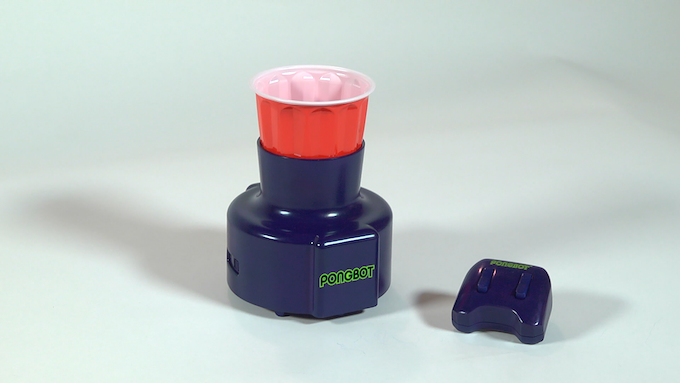 “Pongbot is a robotic cup holder that creates a moving target,” creators Alan Dorfman and Jayson Esterow wrote on the Kickstarter page. “Instead of tossing a ping pong ball at a group of stationary cups, Pongbot spins, darts, and randomly changes direction. This makes beer pong more fun, more exciting and a lot more challenging!”

Dorfman and Esterow have been perfecting the Roomba-like device for a couple of years now, so they are looking to raise $100,000 to help them start producing Pongbots on a larger scale.

The Pongbot holds one Solo cup (or five, if you use it with the caddy) and features LED-lighting, edge sensors that are supposed to keep your beers from falling off the table and a remote control, in case you want to try to foil your opponents yourself. If that’s not your thing, it can also move around on its own.

“Pongbot absolutely raises the bar on everyone’s favorite party game — use it at pre-games, college and frat parties, tailgates, barbecues or when you are just hanging out!” the Kickstarter page says. “You can also play with non-alcoholic beverages, or no beverage at all! It’s a game of skill — man vs bot! Play it solo, one-on-one or in teams.”

One thing to keep in mind: if you’re using the five-drink caddy, you’ll want to make sure there is a beer in each corner or it might trip up the edge sensors and fall off your table — or at least that’s what happened to the people from Engadget.

We’ll assume this won’t be a problem for you, since you’ll keep the beer flowing at your party, right?