Check Out A Gadget That Makes Salads In 60 Seconds (Photos)

If you love salads but you get tired of making them at home, there’s a new gadget for that! In the pictures below, you’ll get to see just how it works to help you make a salad in about 60 seconds.

The 60 Second Salad Maker is currently on Kickstarter, a website for the organization that helps people with creative ideas make those projects realities. This kitchen device is patent pending, and has outdone itself as far as raising money to become a success. So, what is it?

At first, it looks like a plastic colander, but instead of holes, it has slits, which are actually used to slice the vegetables. You put your salad and toppings in the slotted bowl, rinse everything, then put the base on top of the bowl (which acts like a lid), flip it over and slice right through the available openings. Twist and slice some more to get everything down to salad-size. That really takes the extra time and effort out of chopping veggies one by one on a chopping board.

There’s even a neat little feature called the “wave cam” that allows you to twist the bowl around while on the lid so that you can slice from every angle. Check out it out in the pictures below: 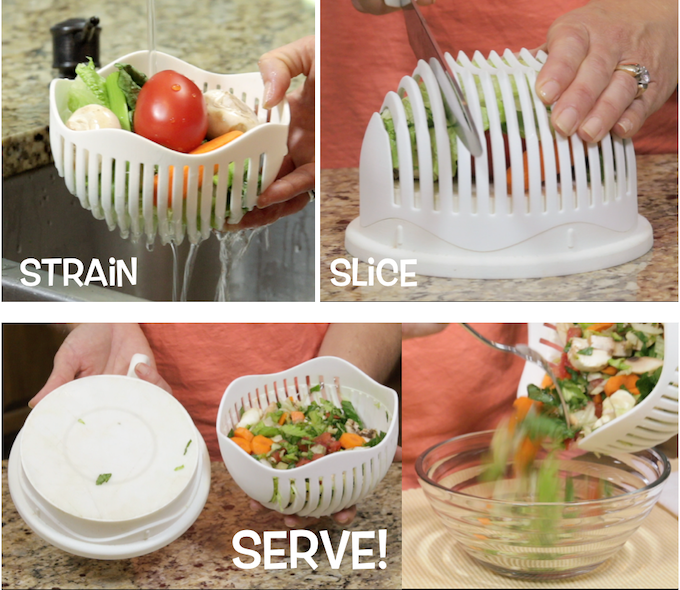 You don’t only have to use the 60 Second Salad Maker to slice veggies, think about fruit salads too! They can be just as much of a pain to make, and honestly, sometimes they’re way better than regular old veggie salads.

The product is dishwasher safe, which is a relief, because cleaning through each of those slits with your hands could get messy, especially if you sliced some juicy tomatoes.

With the time that it takes to raise the necessary funds, go to production and get things moving along, Kickstarter expects to have these nifty little bowls available to the public by May 2017. I guess that means we should be keeping our eyes peeled in the spring, so that we can get our hands on our own 60 Second Salad convenience.