Brace Yourselves, A ‘Game Of Thrones’ Bar Is Coming! (Photos)

If you can drink more wine than a Lannister, we have something up your alley.

Your eyes do not deceive you! You are indeed looking at Daylight Robbery, aka an elaborate “Game of Thrones” pop-up bar that’ll make you feel like you were transported straight to the North.

“We really do love Game of Thrones, and wanted to attract genuine fans like ourselves,” the great folks at Pop Up Geeks told BuzzFeed. “We spent a lot of time on research, sourced the swords and [armor] from The Knight’s Vault [an armorer in Edinburgh] and our bone mugs are made by Abbeyhorn, the official suppliers to the TV series.”

“It was SO. MUCH. FUN,” BuzzFeed’s Hilary Mitchell wrote of the bar, which you can find every Wednesday and Thursday night through the month of February in Edinburgh, Scotland, though we are hoping will take a trip around the seven kingdoms soon. “The level of detail was crazy, and the extensive booze menu was carefully based around George R.R. Martin’s descriptions of the various drinks that the characters enjoy [and get poisoned by] in the books.”

According to Mitchell, after you walk down twisting stairs to the bar, you’ll hear Celtic music and drink strong, flavorful infusions (aka cocktails) or a wide variety of sweet, sour or dry wines from all over the world, so you really can party like you’re in Dorne.

The coolest part about these? According to the Pop Up Geeks, every drink you’ll find is something referenced in George R.R. Martin’s series, so if you’ve been dying to try Tyroshi Pear Brandy or Myrish Firewine, now is your big chance.

If you’d rather stray from accuracy, you can always try MOUNTAIN VODKA, made by … you guessed it! Hafbor Julius Bjornsson, aka Ser Gregor Clegane himself. 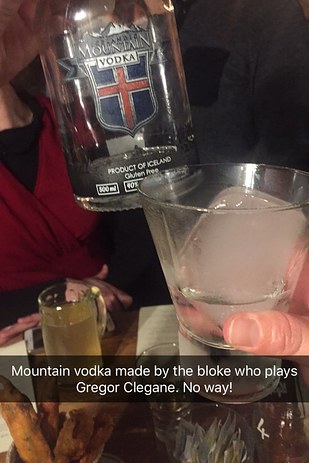 Plus, you can eat Frey Pies (which we are hoping are different than George R.R. Martin’s description, honestly), Sansa’s Lemon Cakes, or even a massive pig haunch, if you are so inclined.

Oh, and there are a ton of really cool props, too!

All hail the bar in the North!